Handbridge Shotokan Karate Club is offering a free taster session for adults interested in taking up karate. The chief instructor is Sensei Mike O’Connor 7th Dan. He is one of only four 7th Dans in the KUGB and has been training for over 50 years. Mike is assisted by Sensei Dave Roberts 3rd Dan.
If you are interested, please contact Sensei Mike O’Connor on 01244 319303 or Sensei Dave Roberts on 07841 710989. Alternatively, you can just turn up on the night. Classes are 6pm-7pm every Monday and Thursday. Loose clothing such as jogging pants and tee shirts should be worn. 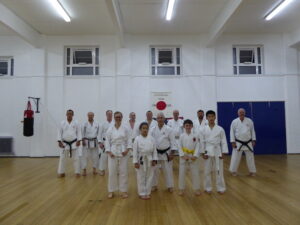 Report by Sensei Mike O’Connor 7th Dan HSKC’s Chief Club Instructor
Trick OR TREAT :   Yes it was possibly not the best night for a grading but it suited the majority of members and we were able to secure Hanshi Andy Sherry 9th Dan to both teach and to grade the members.
Again on the trick or treat theme we were all only going to train for one and a quarter hours which may have tricked some of the Black Belts into thinking it would be an easier session than our normal longer class time, but Hanshi Sherry had tricks galore in running virtually two seperate classes at the same time. The basics were ramped up through the grades but given an extra boost for the Black Belts, we could have done without the central
heating being on, which even with the windows open made this one HOT night.
Adding to the heat were our visitors, we were pleased to have Chris Luecke 4th Dan over from the famous Liverpool Red Triangle and Otto Blank 4th Dan Chief Club Instructor of Ataru Shotokan Karate. Their presence helped lift the senior section to train even harder especially in the Kumite section of the class.
.
Towards the second part of the session after Kihon was done to screaming Kiai It was then Kumite and Kata for everyone. Whilst the Kyu grades started with standard Gohon (Five  step sparring) the seniors performing Five Step with a difference Tori (Attacker) sambon attacks to Uki (defender) triple blocks and triple counters on every step.
As the Kyu grades moved on to one attack Fixed ippon Kumite the seniors did their Five Step Sanbon attacks now in a ju Kumite (free style) manner. “Just one more time,with spirit” seamed to be said very often by Hanshi Sherry but it did the trick as it had everyone steamed up with karate spirit. Is this how Kyoshi Frank Brennan got this phrase??
The Kata for the seniors was Tekki Sandan with arduous attention to detail. The Kyu grades did their grading Kata again with Hanshi polishing their skills resulting in a 100% FULL PASS for every one of our members taking their grading.
Some members had to think of families on this All Hallows night of fun but I think those who came to the dojo got the real treats of the night. Great training and Wonderful grading result, even Hanshi Sherry was very cheerful at the result.
PS. 1.  Some junior members are not present in the group photo as that has been their    parents wishes to not be on the internet.
2. Hanshi Sherry reports that Kyoshi Frank Brennan is recovering from his hip operation and walking unaided which is fantastic news. We all look forward to training with Kyoshi Frank on the 30th november at Egham.

Congratulations to the following students who successfully graded under Sensei Sherry on 31 October 2019. Everyone put in a very strong and spirited performance and all Handbridge students gained a full pass:-

A big thank you to our guests from Ataru and Red Triangle for attending and congratulations to Wayne Williams from Ataru on grading to 2nd Kyu, temporary.

This was another excellent session from Sensei Sherry working on detail, speed and kime. Make sure you all take note of Sensei’s comments and take these into your next sessions.
New katas to learn now so a lot of concentration will be necessary!!